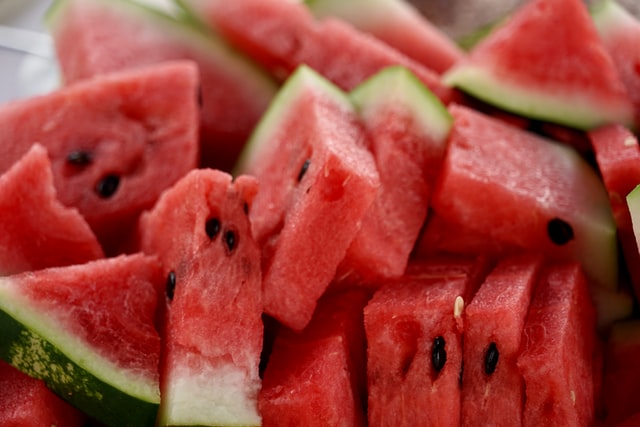 Watermelon benefits for men? Watermelons are juicy and delicious. Green on the outside, red and juicy on the inside. For some people, the only problem with this fruit is the presence of the seeds. However, these seeds come with immense benefits as well.

In this post, we will discuss watermelon benefits for men. This should be an interesting and enlightening read. Without further ado, let’s dive straight in.

Before discussing the benefits of watermelon, let’s first take a look at their nutritional value. When you compare watermelons to other fruits, they have one of the least calorie content. In a cup of fresh watermelon juice, you have just 46 calories. This is even lower than what you get from low-sugar fruits like berries.

Let’s take a closer look at the nutrient content of a cup of fresh watermelon juice.

Benefits of watermelon for men

Watermelons are loaded with amazing nutrients which make them one of the healthiest fruits ever. In this section, we will take a look at why some people refer to watermelons as a natural Viagra. Let’s dive straight in.

Most often than not, you will hear the question, does watermelon help sexually? It is no secret that this fruit is a nutrition powerhouse. Watermelon being a natural Viagra is one of the top benefits of eating watermelons.

One of the reasons for this benefit is the high citrulline content of watermelons. It also contains a healthy amount of lycopene and arginine. Arginine helps to reduce blood pressure, especially in adults suffering from hypertension and prehypertension. Eating watermelons will help you gain access to this benefit.

Citrulline improves cardiometabolic health and vasodilation. Also, it protects from endothelial damage, decreases arterial stiffness, and reduces inflammation. But how does this affect a man’s sexual health?

Studies reveal that men suffering from erectile dysfunction had reduced levels of arginine or citrulline. In some cases, it was a matter of having both reduced at the same time. These studies further revealed that consuming foods with healthy levels of both amino acids will improve erectile dysfunction symptoms.

Watermelons also contain trans-reservatol and L-citrulline. According to scientists, a mixture of both ensures improved firmness in erection which allows for better sexual satisfaction. It also ensures that a man can sustain an erection for longer.

Watermelons contain lots of antioxidants and because of this, they are considered important for maintaining prostate health in men. Research results reveal that watermelons are among the sources of lycopene. In fact, red-fleshed watermelons will provide you with 40 times the lycopene you get from fresh tomatoes.

Lycopene is a very important antioxidant that helps to protect the prostate gland from oxidative stress induced by iron. This antioxidant also helps to decrease lipid peroxidation, a major contributor to the deterioration of the prostate. Studies show that men who consume more lycopene have a 25% less chance of developing prostate cancer. It also shows that they have a 44% less chance of developing other kinds of cancers.

Regardless of what you want to achieve, a stronger immune system or a fitter and leaner body, watermelons are perfect. Like we mentioned earlier, they contain lesser calories than what is obtainable in other fruits. Watermelons also pack a high content of vitamin C.

All of these properties together with the 90 percent water content mean that watermelons are great for working out. Why is this so? The water content means that you enjoy hydration all through your workout. On the other hand, the other nutrients keep you energized while you work on your muscles.

A serving of watermelons contains 9 percent of your daily vitamin A requirement. It also contains 25 percent of the daily vitamin C requirement. Let’s not forget how rich watermelons are in calcium, potassium, and magnesium. All these minerals work together to balance electrolyte and fluid levels. They also support the brain, muscle, and nerve function while promoting cardiovascular health.

Many people don’t know this but watermelons are also rich in amino acids. We have mentioned a few above but others include tyrosine, leucine, and lysine. It is no secret that amino acids are important protein building blocks. With these nutrients, you will build your muscles easily while enjoying “feel good” chemicals as well.

Ultimately, watermelons will provide you lots of energy while you work out. If you exercise regularly, the amino acids present in watermelons will help you to fuel gains and recover faster. Of course, watermelons are not a substitute for protein shakes or post-workout snacks. However, they will help with muscle repair, preventing cramps, keeping the bones strong, and reducing fatigue.

Watermelon has so many amazing benefits. In this post, we have shown you’re the immense watermelon benefits for men. What other benefits do you know? Share with us in the comments section.